When Mrs. Claus dies in a tragic toy accident, Santa vows to make all those little brats pay! But when his rampage kicks off at the home of FBI agent Ellie Tewksberry, he messes with the wrong lady. Mama bear will travel to the ends of the earth to save her son-and Christmas! This December...Santa must die!

"Brilliant reading whatever the time of year. 9 out of 10 stars."

A Harvard-educated Dandy and his blind, drunk companion are all that stand between the Old West and a zombie apocalypse. This is the true story of Custer's Last Stand... whatever they taught you in school is bullshit.

Plucked from the time-stream by mad scientist Nikola Tesla, six pregnant women accidentally kill a young Hitler -- and unleash a nightmare future! Now, with Tesla acting as Charlie to their Angels, they must save the world from a hell of their own creation... before their water breaks!

"The most messed-up comic you should be reading!"

Old comics. New balloons. The writers of this dreck took public domain comics, stripped off the balloons, and came up with all-new stories, improv-style. Working page by page, the only rule is "yes, and..." Once we establish something we can't invalidate it -- we have to build on what came before. 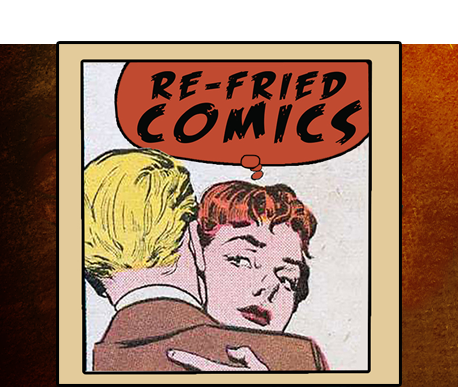